“WOODWORKING…IS MORE THAN A PASTIME OR HOBBY – BEING A WOODWORKER MEANS THAT YOU KNOW THE SATISFACTION & PRIDE THAT COMES FROM USING YOUR HANDS & MIND TO BUILD BEAUTIFUL, FUNCTIONAL OBJECTS, AND THAT YOU’RE AS INTERESTED IN THE PROCESS AS THE OUTCOME. AMID THE SPEED & CHAOS OF THE MODERN WORLD, WOODWORKING GIVES US A PLACE WHERE WE CAN SLOW DOWN, PAY ATTENTION, AND TAKE THE TIME TO DO THINGS RIGHT.” – Aimé Ontario Fraser 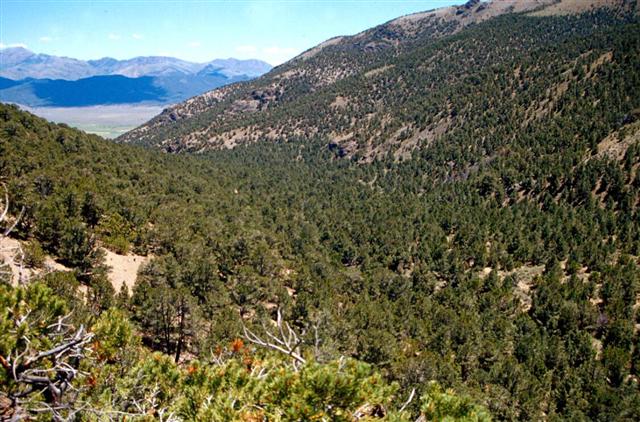 Over the last several years, my parents have been slowly setting up their five-acre retirement ranch named “The Cozy Cove”. Although nowhere near the ocean (they live in Utah), and not at all a sheltered bay, it is a beautiful piece of land nestled in the hills of north-central Utah. It is a rugged desert landscape covered in sagebrush, pinyon pine, and juniper trees, but with water rights and a 450 foot well drilled, it will soon be a blossoming garden of Eden. For clarity’s sake, when I say “my parents setting up the Cozy Cove”, what I really mean is inviting their children to bring the grandchildren and “camp” at the Cove, which is also code for spending the weekend digging septic tank holes, septic field trenches, hauling gravel, laying pipe, and building storage selves in 40-foot shipping containers as they bake in 100-degree weather. It sounds bad, but we have a good time and we enjoy getting out of the city and flexing our mostly dormant muscles.

As we all know, a great ranch starts with an amazing sign. That being the case, I decided to take it upon myself to put together a colossal, sturdy, and weather resistant wood sign for the Cozy Cove. I took two eight-foot 4×6 beams, cut them in half, and then glued them together with good old Gorilla Glue. After the glue set, I drilled half-inch holes diagonally from beam to beam and glued in half-inch dowels as pegs. I was trying for a sort of timber frame style joinery for extra support on the joints.

My wife and kids picked the font, we created a paper template of “Cozy Cove”, and the real work began. After the name was traced from the template to the wood I began carving out the negative space around the name, in order to create raised letters for better readability from all angles as vehicles approach the ranch entrance. Once the carving was complete the entire sign received a nice sanding. My wife did most of the painting. We chose apple red for the sign itself (my mom’s favorite color), dark walnut stain for the negative space around the letters, and bright white for the letter faces and sides. Once everything dried, the entire sign was sealed using clear marine varnish so it will stand up to the harsh Utah climate, sub-zero temperatures in the winter and 100+ in the summer.

I really can’t help myself. Every time we go camping I always end up sitting by the fire in the evenings with a freshly cut young aspen; the family is all together, laughing boisterously, telling ghost stories, and just having fun. It is while we are enjoying each other’s company that I begin clearing the bark and carefully scraping away the green cambium layer, eventually revealing a bright white wooden canvas. I usually start out staring at the bright wood, trying to imagine what designs will work with its curves, bumps, and pits. This lasts only about two minutes, because hey, all I really want to do is create something while gazing into the firelight and breathing the crisp night air, so I dig in with my pocket knife and let my imagination take over.

The images below are of one of my favorite hiking staffs I carved. I liked it so much, I brought it home, hung it in the garage with weights tied to its point so it would dry straight, burned it in patches where there were no carvings to give it some texture, then stained and polyurethaned it so it would stand up to tough hiking conditions. Finally I wrapped it with a black leather grip for a little extra comfort and control. 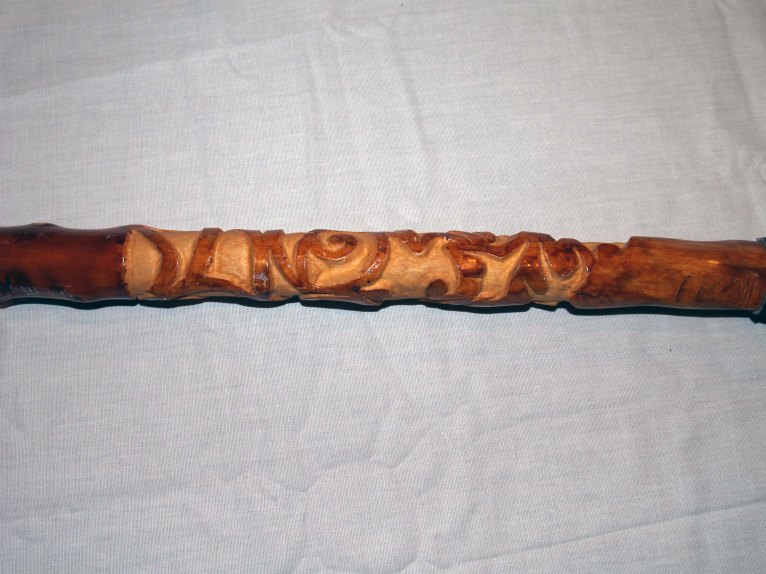 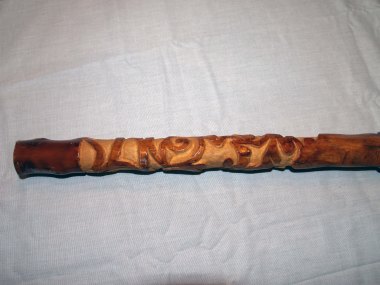 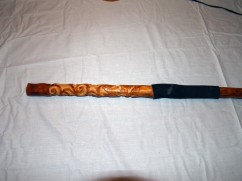